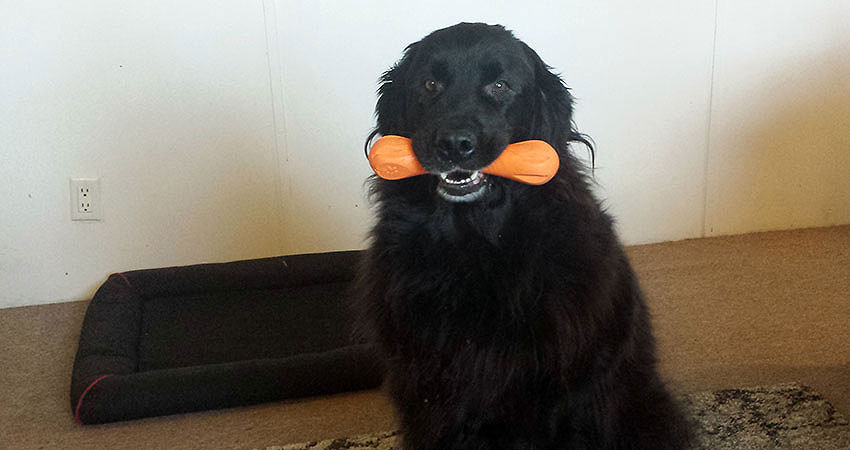 I literally spent years searching for a nearly indestructible chew toy for my big dogs. After wasting money on toys that claimed to be “Tough, Durable, Chew-Proof” that were still easily destroyed, I finally found it… That was 10 years ago and it's still in nearly perfect condition today.

My Dog is a Large Breed, Heavy, Aggressive Chewer

I realized early on that my dog could chew. As a Newfoundland-Rottweiler mix, her powerful jaws were expected, but right off the bat she seemed to be beyond the typical chewer.

She destroyed shoes, ate the drywall off of the house, and chewed rocks for fun. It got so bad that her poop would make clinking noises as it fell due to the high rock content. I even caught her chewing a steak knife once. I was horrified to find blood all over it as she calmly gnawed it, oblivious to what had to have been a good amount of pain.

I was seriously concerned for her health and well-being at this point. I thought, it’s okay – I can manage this. I’ll just give her appropriate targets for her chewing behavior and she’ll stop making herself a bloody, rock filled mess.

It was only the beginning. Tough tennis balls made for doggies were destroyed in seconds. Squeaky toys were nothing but a choking hazard, reduced to shreds almost immediately. Even super tough rubber toys got chunks ripped out of them within a week.

I was exasperated and she was more than happy to demonstrate how utterly inadequate these toys were to stand up to her jaws. While she was content to ingest all manner of plastic and rubber tidbits, I was discouraged by the amount of money that had simply disappeared into her belly and I was worried about what all that stuff was doing to her insides.

I had resigned myself to spending a fortune on toys meant to redirect her chewing from rocks and the walls of my home. Even if that meant they would only last a week at best and I’d have to take them away from her to keep her from eating them in their entirety.

After trying toy after toy, only to see each one destroyed I finally struck gold and one day, a doggy miracle happened. I ordered the large West Paw Zogoflex Dog Bone Chew Toy for aggressive chewers. The description said it was 100% guaranteed – yeah, guaranteed to end up in my dog’s tummy - I thought to myself.

Resigned as I was to spending an infinite amount of money on decidedly finite dog toys, I bought it anyway. The toy arrived and was given to the resident chew-monster. A week passed and it survived without any chunks taken out of it. Then two and three weeks came and went with no discernable damage done. I was shocked! She gnawed on it every day and still, it lived!

I took her to the lake for some swim time and discovered that not only was this toy tough as nails, it floated too! I had completely given up hope of finding a toy that would work for her, but here was West Paw to prove me wrong.

That was a decade ago and we still have the exact same dog bone, in nearly perfect condition. It has not gotten gross and slimy as some toys do and it’s still not missing a chunk. I can throw it in the lake for her swim time and then come home and toss it in the dishwasher to kill any lake bugs.

I genuinely hope this article helps other big dog owners to save some cash and heartache by purchasing a high-quality product the first time around! The West Paw Zogoflex is absolutely the best dog toy purchase I have ever made.

We read the product reviews and specifications so you don't have to. If it's on our website, it's for large breeds.

Big Dog Shopping is a participant in the Amazon Services LLC Associates Program, an affiliate advertising program designed to provide a means for sites to earn advertising fees by advertising and linking to amazon.com and affiliated sites.